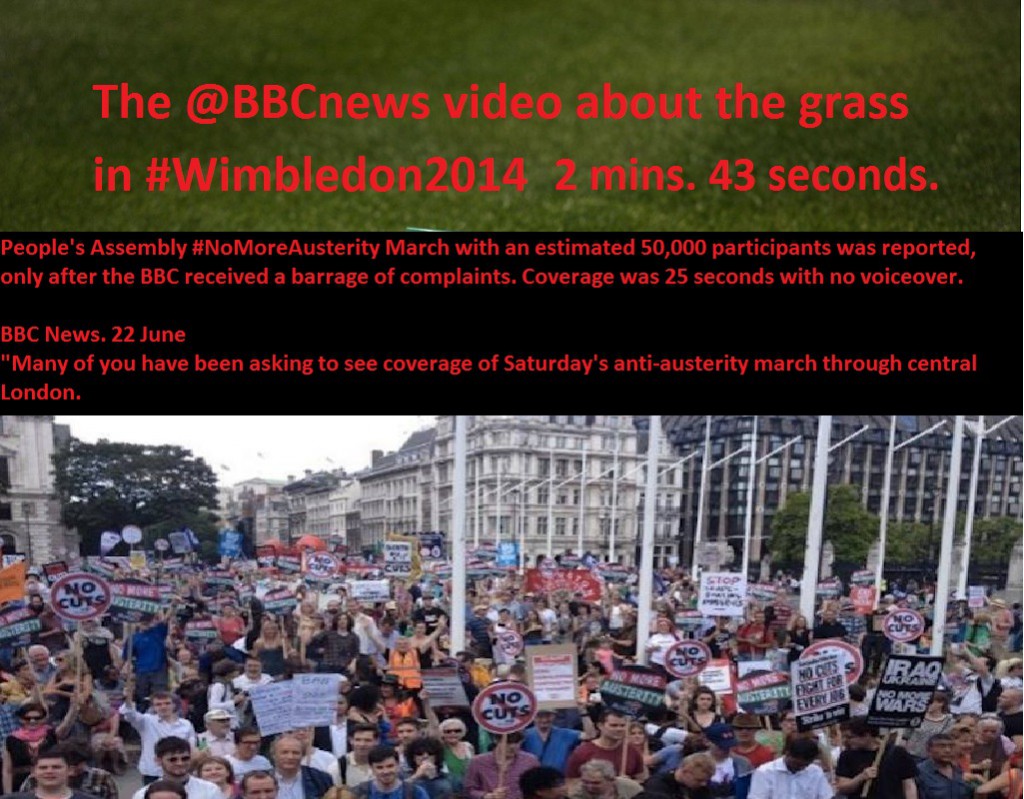 This is the form letter response from the BBC Complaints department regarding the news blackout regarding the People’s Assembly No More Austerity March and Rally in Parliament Square.

The BBC seem to be ignoring the complaints and just sending the same form letter response, with the only difference being the names of the recipients.

Thanks for contacting us about coverage of the People’s Assembly anti-austerity demonstration on 21 June.

We understand you feel there was insufficient coverage of this demonstration by BBC News.

We have received a wide range of feedback about our coverage of this story. In order to use our TV licence fee resources efficiently, this general response aims to answer the key concerns raised, but we apologise in advance if it doesn’t address your specific points in the manner you would prefer.

Your concerns were raised with senior editorial staff at BBC News who responded as follows:

“We covered this demonstration on the BBC News Channel with five reports throughout Saturday evening, on the BBC News website on Sunday, as well as on social media. We choose which stories we cover based on how newsworthy they are and what else is happening and we didn’t provide extensive coverage because of a number of bigger national and international news stories that day, including the escalating crisis in Iraq, British citizens fighting in Syria and the death of Gerry Conlon.

We frequently report on the UK economy and what it means for the British public. We also reflect the concerns of people such as those demonstrating, and others who hold opposing views, across our daily news output on TV, radio as well as online, and we also explore them in more depth including in our political programming and current affairs investigations, debates on ‘Question Time’ and during interviews and analysis on programmes such as ‘PM’ and ‘Newsnight’. Inevitably, there may be disagreements over the level of prominence we give to stories, but we believe our coverage of this subject has been fair and impartial.”

We hope this goes some way to explaining our position, and thanks again for taking the time to contact us.

The stories that BBC found more ‘newsworthy’ by midnight that day

Some updates from other sources:
Last week, the BBC chose to ignore a protest march against Austerity.

You may have heard of it: 50,000 people marched from the BBC’s new HQ to Westminster, the latest in a series of protests against the agenda of cuts and privatisation which are slowly, inexorably destroying the fabric of the British State.

But in spite of it starting at the BBC’s front door, the corporation chose to ignore the protest. That evening’s news bulletins were filled with 30,000 people having a party to celebrate the Summer Solstice; and the important news that a single Scotsman had cheered for England at the World Cup.

But nothing at all about any views which run counter to those of the coalition. There was (apparently) a 25 second mention on BBC Radio 4, and two days later a 30-second clip appeared on the BBC News website. But that’s it.
The illusions of activity at the BBC