This article was derived from BIFF ! (Britain & Ireland Frack Free)

Today, two of them threw a disabled man into a ditch – apparently breaking his knee – in order to snatch arrest a pregnant woman.

These good people are trying to do the Police’s job (sworn by oath) of protecting life and property – while the Police are instead arresting and brutalising them and forcing through corporate ecocide.

What is wrong with this picture? 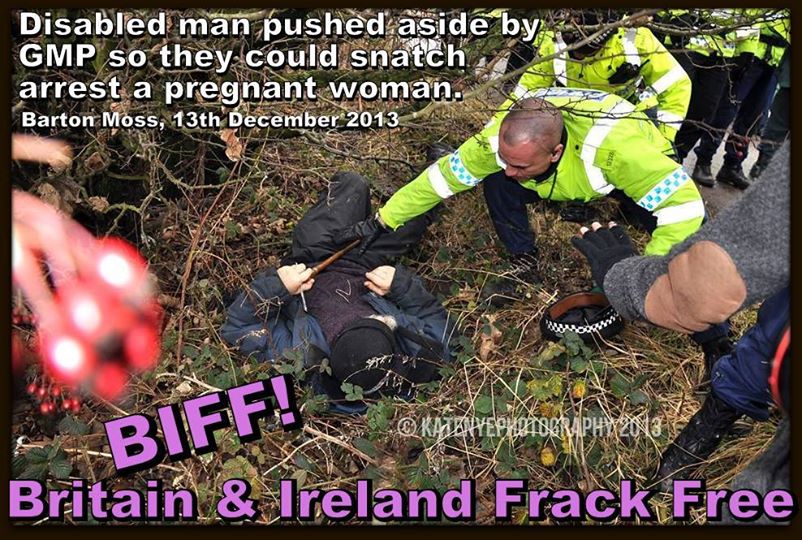 A community seeks to protect itself when the government fails to do the job – and this is the outcome today:

SALFORD POLICE TARGET PREGNANT AND ELDERLY AT BARTON MOSS PROTESTThe peaceful protest involved people shuffling down Barton Moss Road to slow the lorries. However, despite apparent assurances given by the police during a meeting at the Barton Moss Community Protection Camp yesterday that there would be no more arrests, three arrests were made, including a pregnant woman and a Green Party candidate for the European elections. Meanwhile, an ambulance was called after a disabled man was barged into bushes by police during the `snatch’ arrest of the pregnant woman, and an elderly lady was targeted and removed from the protest against her wishes

Just after an 82 year old lady was removed against her wishes to peacefully protest, police goons move in to snatch a pregnant lady, barging a disabled man over into a ditch in the process, breaking his knee.

Brief interview with the injured man.

Anti-fracking protesters clash with police at drilling site near Manchester

BARTON MOSS UPDATE FROM BIFF AND TIM. → ← LEFT UNITY: A CASE FOR THE REPUBLICAN SOCIALIST PLATFORM