Naomi Klein supported both actions on October 11th: The Global Frackdown Day and the European Day of Action Against TTIP, at her fantastic, life affirming (for activists at any rate!) talk last night.

Naomi plugged these actions at the very end of her talk and did not quite get the chance (maybe she was unaware) that in an attempt to address the awkward result that both actions are on the same day, the organizers have made sure that both actions on October 11th are at different times in the day and close by, location wise,  so that supporters can make it to both!

TTIP and fracking are closely related in essence because TTIP is the legal framework that would render the fight against fracking legally impossible to truly “win”. 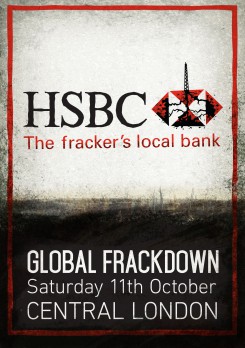 Fracking is the fuel extraction process that threatens our water supply, air cleanliness and promotes further climate change while sending a clear message to the UK that Westminster does not represent the people but in fact energy companies.

TTIP is the Transatlantic Trade and Investment Partnership that promises to give corporations the right to sue governments if governments pass laws that will affect their  investment via the Investor State Dispute Settlement (ISDS) provision. There are many other matters to fear about TTIP not least the fact that it is being negotiated with such tenacious ‘confidentiality’  that many believe it defies the regulations as stipulated in the Treaty on the Functioning of the European Union.

Both actions are international days of action and both causes are phenomenally important as both TTIP and fracking threaten our lifestyles and the future well being of both planet and people.

It is important to accept that there are people within the establishment who are fighting the good fight, but their fight is hard and they are outnumbered so they need the public support both emotionally and logistically via contributions through letters, petitions, and involvement.

Believe that this world can be a better place and join the movements that encourage positive, socially conscious, planet loving change.