Didn’t believe it until I saw the live stream. This is something that is becoming a habit due to the ridiculous arrests police are making to try and whittle down the protectors numbers…

1. Someone arrested for swearing (laughed out of court)

2. Someone arrested for a cigarette end falling out his hand as he switched hands with his phone (de-arrested) and

3. Someone arrested for walking in a manner the police do not like. (Dearrrested due to having too many witnesses.

4. Pouring Orange juice into bushes (she was saving a bee).

The Police intimidation has previously been described as how an abused person would be treated by their abuser. All captured via livestream and mirrored on youtube.

Abuse doesn’t have to be blatant physical violence, it can be pushing and shoving, throwing water at someone, verbal bullying. 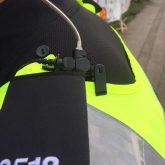 Already Kettled early in the morning.
PNR2 Water tankers come out and I go for a run

PNR6: Police intimidation by driving at livestreamer. Then arrest person for walking funny. Then de-arrest person.

Afterwards Katrina L is arrested off camera. Charged with Section 5 of the Public Order Act 1986

Whether behaviour can be properly categorised as disorderly is a question of fact. Disorderly behaviour does not require any element of violence, actual or threatened; and it includes conduct that is not necessarily threatening or abusive. It is not necessary to prove any feeling of insecurity, in an apprehensive sense, on the part of a member of the public (Chambers and Edwards v DPP [1995] Crim LR 896). The following types of conduct are examples, which may at least be capable of amounting to disorderly behaviour:

causing a disturbance in a residential area or common part of a block of flats;
persistently shouting abuse or obscenities at passers-by;
pestering people waiting to catch public transport or otherwise waiting in a queue;
rowdy behaviour in a street late at night which might alarm residents or passers-by, especially those who may be vulnerable, such as the elderly or members of an ethnic minority group;
causing a disturbance in a shopping precinct or other area to which the public have access or might otherwise gather;
bullying.

Section 5 should be used in cases which amount to less serious incidents of anti-social behaviour. Where violence has been used, it is not normally appropriate to charge an offence under section 5 unless the physical behaviour amounts merely to pushing or undirected lashing out of a type likely to cause no more than a glancing blow, minor bruising or grazing. Such conduct may also be classified as disorderly and suitable for a charge under section 91 CJA 1967 in appropriate circumstances.

There must be a person within the sight or hearing of the suspect who is likely to be caused harassment, alarm or distress by the conduct in question. A police officer may be such a person, but remember that this is a question of fact to be decided in each case by the magistrates. In determining this, the magistrates may take into account the familiarity which police officers have with the words and conduct typically seen in incidents of disorderly conduct. (DPP v Orum [1988] Crim L R 848).