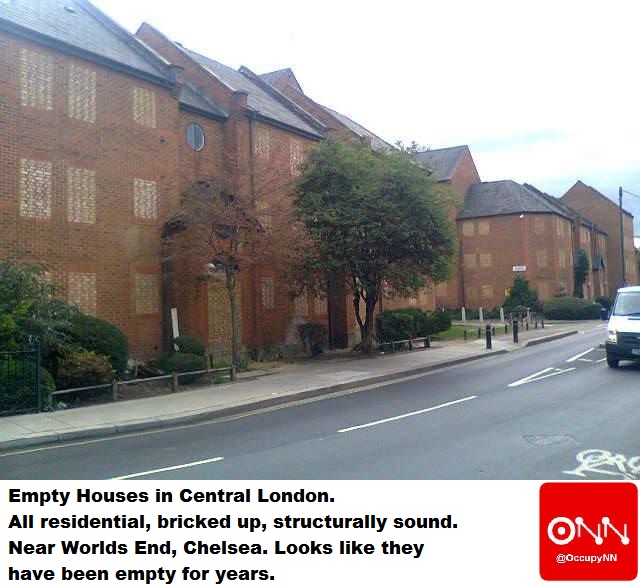 This is the question being asked by a few people. Kensington and Chelsea contains some of the most expensive real estate in London, yet there are a number of empty residential properties, some empty for years.

In this case, it has become more profitable to keep a property empty instead of having them occupied. Statistics point to 100,000 empty in London alone and a million across the country. If the 99% of the people cannot afford to buy these homes anyway, why should people be concerned? 100,000 empty properties means people chasing less available housing.
This means less need for maintenance, so alot less work for plumbers, electricians, painters and decorators.

Before the Neo-Liberal ideals of Thatcherism gained sway, 300,000 housing were built yearly. Along with the sale of two million council housing that were not replaced, building was reduced to 100,000 per year. These ex-Council housing became private properties with one third rented out by private landlords. Five bedroom houses in inner London, became “mansions”. The working classes were given the poisoned chalice of owning their own homes, but were not informed that their children will not be able to gain council housing. Thirty years later, false scarcity of curtailing house building ensured London became one of the most expensive real states in the world. Resulting in families cleansed from areas from which they resided for generations, as the housing bubble priced them out of their homes.

If you have any information about these red brick buildings please comment on the page.

LINKS:
2012 Freedom of Information request to Royal Borough of Kensington and Chelsea

Britain’s most expensive block of flats is virtually empty

View all posts by Occupier's Perspective →