These are pictures of the land “owned” by Mr Greenwood, Stumble Wood, the other side of the rail track between The Caudrilla site and Balcombe Community Protection Camp. waiting to lock the gate. 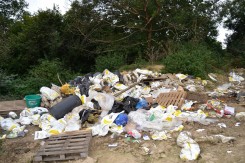 Photo of how the Cuadrilla site has been treated.

The Environment Agency has this morning issued Cuadrilla with a Radioactive Substances Activity Permit for Balcombe.

From 12th September 2013.
Lord Greenwood has an Agricultural Mortgage with a Company called AMC (Agricultural Mortgage Company ) Who have not been approached about the Drilling on the land . They are not pleased , beings as this mortgage is provided by Loyds TSB a bank which is partially owned by the taxpayer . Who will lose if this land is spoiled ??

Published on 30 Sep 2013
Balcombe 28th September 2013, Followed Police up the road into the woods and this is what happened.

BOHEMIA: THE OCCUPIED PUB HOLDS ITS FIRST MEETING → ← MASS REJECTION OF TORY ATTACKS ON THE POOR AND THE NHS.