London was never a particularly cheap place to live – in fact, Rightmove’s figures suggest that the average asking price of a property in London has risen by £80,000 since the start of 2014. As a result, prices are now at an all-time high, and only look set to rise in future.

However, as is to be expected, some boroughs are significantly more expensive than others, with some enjoying a meteoric rise in prices following different developments, ranging from infrastructure and transport links to foreign investment. To chart these changes, Delivery Quote Compare have collated data from the Land Registry, the London Development Database and the Department for Communities and Local Government to create this informative infographic: Booming London Property Prices by Borough. 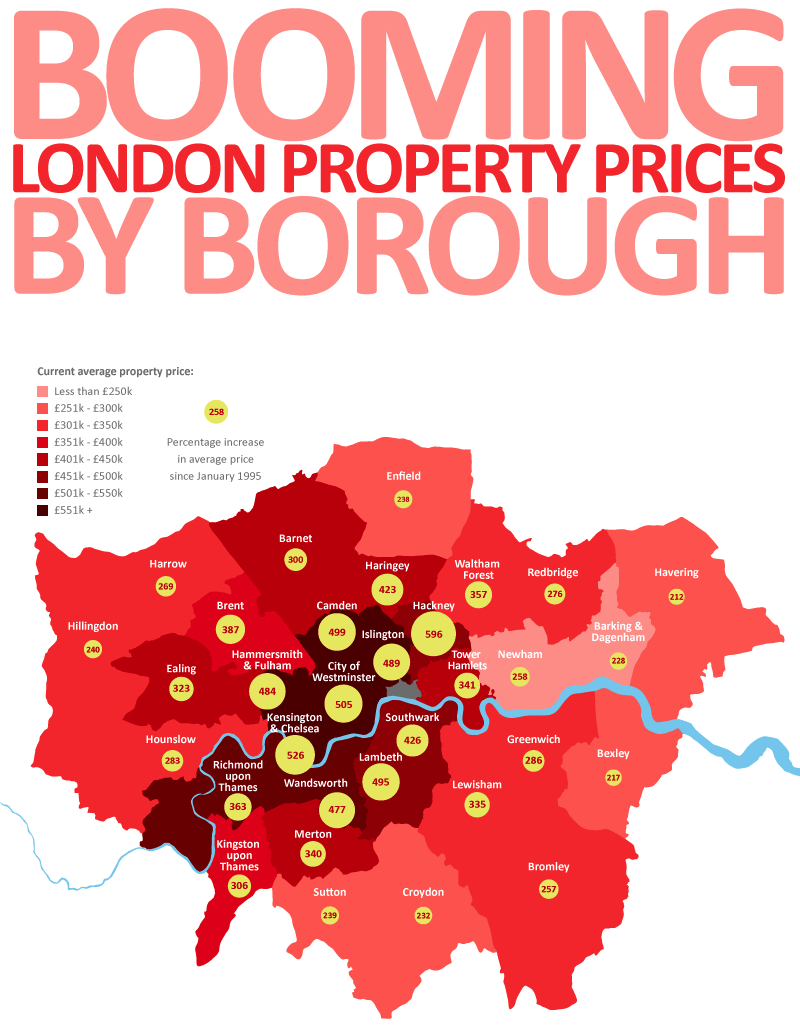 The property gap has continued to widen over the last twenty years and the trend suggests that prices will only continue to skyrocket. According to Rightmove, 10 out of London’s 32 boroughs have experienced asking price rises of over 20%, with a 43% increase in Tower Hamlets alone. The streets of London may be paved with gold, and it looks to be glittering brighter than ever before. But if you’re looking to make your fortune in property, you’d better get in there quickly. 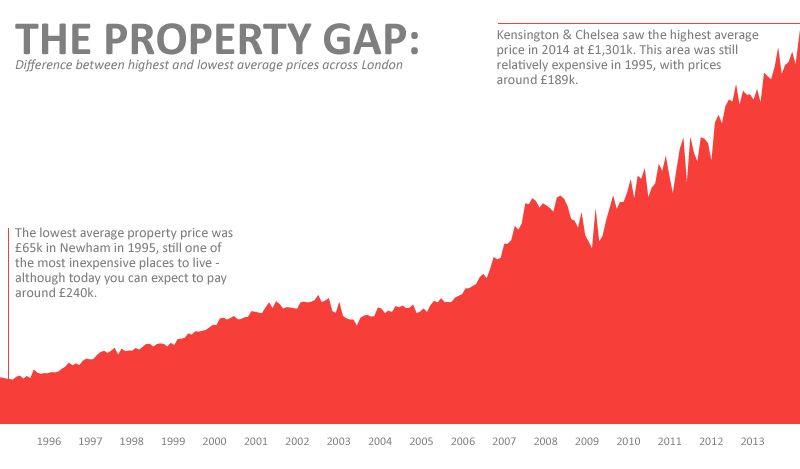 Some areas have experienced larger increases than others when it comes to property prices, but even supposed “cheaper” locales, like Newham, have surged by 258% – what would have cost around £65,000 in 1995 is now much closer to £240,000. Buying your first family home in the capital for less than £100,000 is unheard of nowadays – and it doesn’t take a genius to guess how the more upmarket boroughs have been affected.

The most expensive areas, such as Kensington and Chelsea, were already reassuringly costly in the mid-1990s, with a typical property setting a London dweller around £189,000. However, with a massive leap of 526% in price growth, any self-respecting would-be homeowner would now be looking at just over a cool million. Which is expensive – but great for a potential investor, if they can afford it!

What about the ordinary Londoner looking to buy? Is it still doable in this day and age, or will getting on that first rung of the London property ladder forever be a pipe dream?

It’s definitely possible, as the data shows – but it’s by no means easy. If you don’t want to live in a tiny box studio flat in Knightsbridge, there are a few options: East London would probably be your best starting point, with the cheapest areas being Barking and Dagenham, Newham, and Havering, which will set you back between £231,000 and £271,000 respectively. Yes, you read correctly – £200,000+ is now considered the bottom end of the market. Places like Sutton and Croydon, on the fringes of South London, are similarly well priced – but if recent price rises are anything to go by, the faster you buy somewhere, the better!

The average increase in property prices throughout London since 1995 stands at 258%, or two and a half properties if you happened to be buying back in the nineties. However, some areas saw increases of more than double that – with boroughs like Hackney seeing an astronomical increase of 596%. With other boroughs hot on its heels, including the hustle and bustle of Southwark, the socialite haven of Wandsworth, and the cultural hubs of Lambeth all experiencing 400-500% rises; there’s a lot to choose from – but nothing comes cheap!

Although this isn’t all bad news and doom and gloom. London has always been reasonably expensive compared to the rest of Britain – much like the New Yorks and Sydneys of the world – and this fact will always be reflected in property prices. It stands to reason that the increase in prices is not only a result of inflation and investment, but also signifies improvements in financial markets – and Britain’s economic standpoint as a whole. In other words, property in London is one of the facets leading the economic recovery, and in that regard, house prices couldn’t be healthier.